Written on 25 July 2015. Posted in Schools and conferences

The purpose of the International Scientific Forum "Science Days. St. Petersburg 2015. The new materials " - the creation of a platform for the communication of scientists both within the scientific community as well as with experts of related fields of industry, business, education. The forum should help to attract young professionals in the field of research and development, the formation of new successful scientific groups, the development of cooperation between Russian research organizations and thus create a common scientific and technological space, the development of strategies to commercialize research results.

Written on 28 May 2015. Posted in Schools and conferences

It is our great pleasure to announce 9th Energy, Materials, and Nanotechnology (EMN) Meeting, which will take place in San Sebastian, Spain from 1st till 4th September, 2015.

The conference website has been updated and the Abstract Submission and Registration are open at: http://www.emnmeeting.org/spain/

Please submit the abstract of any work you may wish to present according to the corresponding instructions and proceed with your registration details.

On behalf of the 2015 EMN Meeting, the International and Local Organizing Committees, we are looking forward to have you with us in San Sebastian.

Written on 28 May 2015. Posted in Schools and conferences

This is the first announcement about the 4th International Soft Matter Conference (ISMC 2016) which will be held at the Alpexpo Alpes Congrès in Grenoble, France  from 12-16th  September 2016. Three previous conferences were held in Aachen (2007), Granada (2010) and Rome (2013), and brought together up to 800 experimentalists and theorists working in the Soft Matter field. The conference covers both the fundamental and applied aspects of Soft Matter and Complex Systems. Local organisers of ISMC2016 include scientists from the large-scale facilities ILL and ESRF as well as from the Grenoble University and other research organisations such as CEA, CNRS, and INPG in Grenoble.

Further details are available at URL www.ismc2016.org or can be obtained by e-mail : This email address is being protected from spambots. You need JavaScript enabled to view it.

A second announcement with more details about the conference program and abstract submission will be circulated later this summer.

The European School on Magnetism 2015

Written on 27 February 2015. Posted in Schools and conferences

The next session of the “European School on Magnetism” (ESM) series will take place in Cluj-Napoca, Romania, from August 24th to September 4th, 2015. The European School on Magnetism is a pan-European event now closely associated with the JEMS (Joint European Magnetic Symposia) conferences, with regular contact between the scientific advisory committees, and sharing the magnetism.eu portal.

Written on 17 February 2015. Posted in Schools and conferences 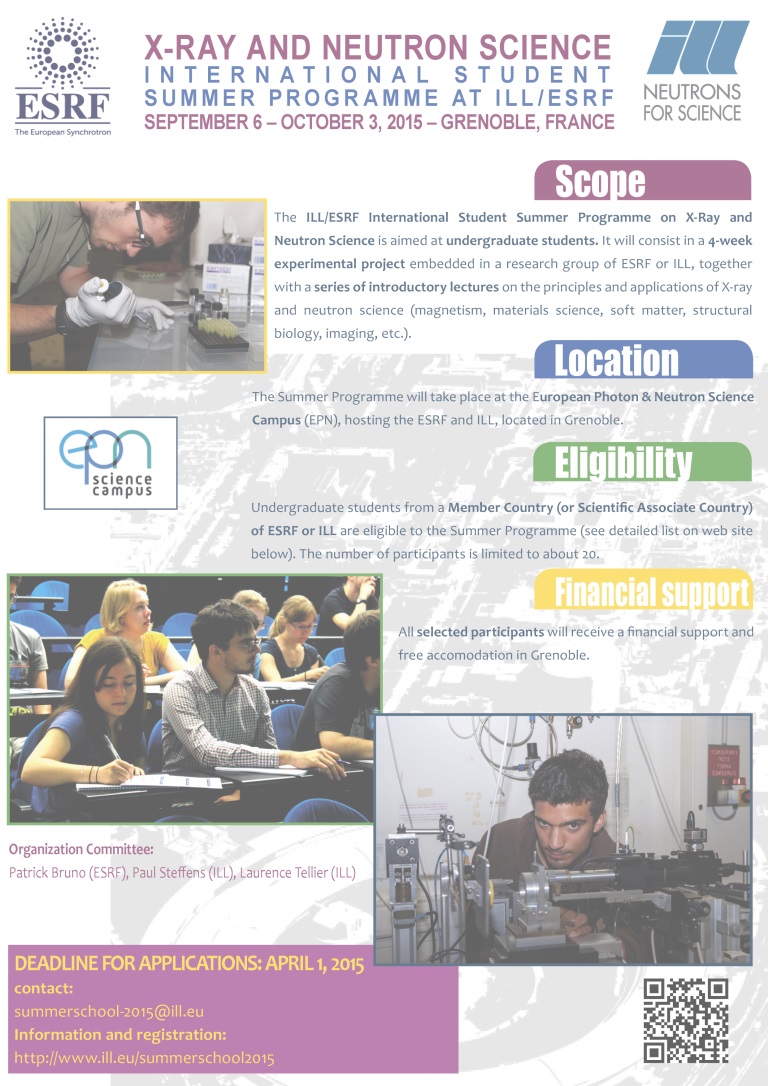 We would like to attract your attention to the Summer School which will be organised this summer by the ILL and the ESRF.
This may be an excellent opportunity for any student interested to discover the techniques of neutrons and X-Ray and the research at our institutes.

Written on 23 October 2014. Posted in Schools and conferences

The Spanish Neutron Scattering Community is pleased to host the VI EUROPEAN CONFERENCE ON NEUTRON SCATTERING (ECNS), to be held in Zaragoza (Spain) in 2015 at the Auditorio de Zaragoza.

ECNS 2015 will present plenary lectures by leading scientists, plus invited talks and poster presentations. There will be parallel symposia covering frontier scientific areas.

The city and the meeting venue will provide an ideal backdrop for scientific discussion, and the organizers are working to organize an event optimized for interaction and interchange.

We hope that you will join us in Zaragoza for ECNS 2015.  Your active participation is the key to the continued success of ECNS!

We look forward to welcoming you to Zaragoza for the VI European Conference on Neutron Scattering, 2015.

Written on 14 October 2014. Posted in Schools and conferences 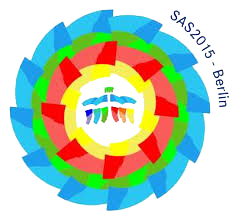 The Organising Committee is pleased to announce that the conference will be held Sunday 13 - Friday 18 September, 2015 in the main building of the Technische Universität Berlin, Str. des 17.Juni 135 in the Western Centre of Berlin.

Please book your accommodation as early as possible. There are always plenty of events in the city, especially in September.

Our website is available at http://www.sas2015.org , where we will also present information on collaborating hotels.